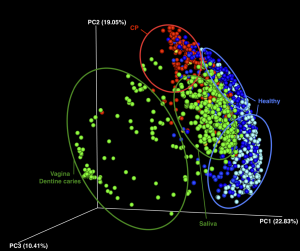 Signature of microbial dysbiosis in periodontitis

Periodontitis is driven by a disproportionate host inflammatory immune response induced by an imbalance in the composition of oral bacteria. It instigates microbial dysbiosis along with failed resolution of the chronic destructive inflammation.The objective of this study is to identify microbial signatures for health and chronic periodontitis at the genus level and to propose a model of dysbiosis including the calculation of bacterial ratios.

DESIGN AND METHODS: Published sequencing data obtained from several different studies (196 sub-gingival samples from patients with chronic periodontitis and 422 sub-gingival samples from healthy subjects) were pooled and submitted to a new microbiota analysis using the same VAMPS (Visualization and Analysis of Microbial Population Structures) analysis pipeline to identify microbiota specific to health and disease. Microbiota were visualized using CoNet and Cytoscape. Dysbiosis ratio, defined as the percentage of genera associated with disease relative to the percentage of genera associated with health, were calculated to distinguish disease from health. Correlation between the proposed dysbiosis ratio and the periodontal pocket depth was tested on a different set of data obtained from a recent study to confirm the relevance of the ratio as a potential indicator of dysbiosis.

RESULTS: Beta diversity showed significant clustering of periodontitis-associated microbiota according to clinical status at the genus level, independent of methods used. Specific genera were highly prevalent (>95%) in health (Veillonella, Neisseria, Rothia, Corynebacterium and Actinomyces) while other genera were associated with chronic periodontitis (Eubacterium, Campylobacter, Treponema and Tannerella). The calculation of dysbiosis ratio based on the relative abundance of these genera found in health versus periodontitis was tested. Non-periodontitis samples were significantly identifiable by low ratios as compared to chronic periodontitis samples. When applied to a sub-gingival set with well-defined clinical data, the method showed a strong correlation between the dysbiosis ratio, as well as a simplified ratio (Porphyromonas, Treponema and Tannerella to Rothia and Corynebacterium), and pocket depth.

CONCLUSION: Microbial analysis of chronic periodontitis can be correlated with the pocket depth through specific signatures of microbial dysbiosis.

Defining microbiota typical of oral health or chronic periodontitis is a difficult task. Periodontal disease evaluation is currently based on probing of the periodontal pocket. However, the status of pockets « on the mend » or sulci at « risk of periodontitis » cannot solely be addressed through pocket depth measurements, nor by current microbiological tests available for practitioners. Thus, a more specific microbiological status of dysbiosis could help in future diagnoses of periodontitis. In this work, data from different studies were pooled to improve the accuracy of the results. However, analysis of multiple microbiota from different studies intensified the bacterial network and complicated the search for reproducible microbial signature. Despite different methods used in each study, the microbiota investigated at the genus level showed that some genera are prevalent (up to 95% of the samples/microbiota) in health or disease, allowing the calculation of bacterial ratios (i.e. dysbiosis ratios). The correlation between the proposed ratios and the periodontal pocket depth was tested which confirmed the link between dysbiosis ratios and the severity of the disease. The importance of this work is promising but longitudinal studies will be required to improve the ratios and define microbial signatures of the disease, which will allow the monitoring of the periodontal pocket recovery and conceivably, the potential risk of periodontitis in healthy patients.